NPCs, Non-Player Characters, are the principle sources of information about the game's lore. They are also the usual sources for quests and quest rewards, and the NPC merchants are invaluable for equipping your hero for battle.

NPCs will play their familiar role in Diablo 3; giving quests, telling the game story, and sometimes assisting characters in battle. Not much has been seen of NPCs thus far; there were no towns or merchant NPCs in the Blizzcon demos in 2008 or 2009, and the few NPCs found in the field were simply there as part of quest dialogues.

While it's unknown just how much of an expanded role NPCs will play in Diablo 3, the team has given some hints of their plans. Julian Love spoke on this in an October 2009 interview. [1]

Planet Diablo:Can you tell us about the role of NPCs -- How big a role will they play in Diablo III? In Diablo II , sort of going along with that, they didn't move that much, they stayed in their general area of within their town; are they going to be more mobile in the game?

Julian: I'm gonna say yes, absolutely. Without giving you any details with exactly how, where, and why because it starts to reveal too much story, the intent there is, and in all ways really, the intent is to make the world seem more like an actual living, breathing world. This is why we have you interacting with the backgrounds as much as we do, this is why we're making the NPCs really play a bigger part in the story itself, and part of that will be getting more direct and active involvement with, you know, the NPCs themselves and having them move around and do things and see them doing the things that happen in the real world, not just hearing about it through dialogue. 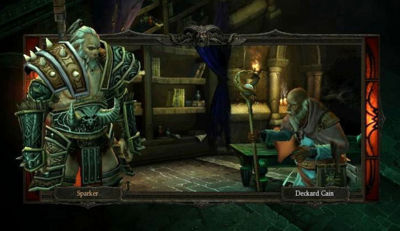 NPC conversations in Diablo III are shown in the normal game screen. The camera merely zooms in a bit, while maintaining the same overhead view. The conversation is ended and the screen returns to normal if you click anywhere outside of the dialogue tree, or press the space bar or Esc key.

When the game debuted at the WWI event in June 2008, NPC conversations were portrayed in a special pop up window display which you can see below. This approach was abandoned between the June premiere and BlizzCon in October, since the D3 Team felt that it took players out of the flow of the game.

The following NPCs are confirmed to appear in Diablo III. They are covered on individual article pages; click through to learn more about them.

Also see the NPC category for a complete list of NPCs, both confirmed and speculated.

The following are likely to be NPCs, but have not yet been seen in the game.

文件:Leah-concept1.jpg
An official still image from the cinematic trailer.

Leah was mentioned by name in the WWI 2008 gameplay trailer, but was not seen in the BlizzCon 2008 demo. From what the Barbarian says in the WWI gameplay movie, Leah is an NPC who is Cain's assistant, who tells the hero that he (Cain) is missing in the Monastery, and must be rescued.

Some players have speculated that Leah is the young female referred to in the Gnarled Walkers lore entry from the official D3 website. In it, when speaking about the village of Wortham, Abd al-Hazir says:

I likewise found it odd that there seemed to be only elderly people in the village, with the exception of one beautiful young woman whose father was quite insistent I keep my distance from her. Though he was rude on this point, I found him to be a rather sociable sort once convinced I was not interested in his daughter. He introduced himself as Pablo DeSoto

Could Leah be Pablo DeSoto's daughter? The location seems wrong; she's in Tristram with Cain in the teaser cinematic and apparently in the quest as demonstrated in the WWI gameplay movie, but the journal entry might be outdated, or be information from before the game begins; perhaps demons entirely overran the village of Wortham, and Leah and Pablo de Soto were forced to flee to Tristram?

Pablo DeSoto is seen in detailed concept art, and mentioned in the Gnarled Walkers lore entry, as quoted above. He is said to be knowledgeable of magic and mentioned to have some sort of grudge against necromancers. This might be a flashback or homage to 模板:Iw, the Necromancer-hating NPC merchant from Act One of Diablo II.

Adria, the witch from Diablo 1, is mentioned in Deckard Cain's journal, and was seen in concept art in the Blizzard Museum at Blizzcon 2008. Not everything in concept art makes it into the final game, but with a lot of returning elements from the story of D1 in D3, and much of the early action taking place in and around Tristram, a return of Adria seems like a safe bet.