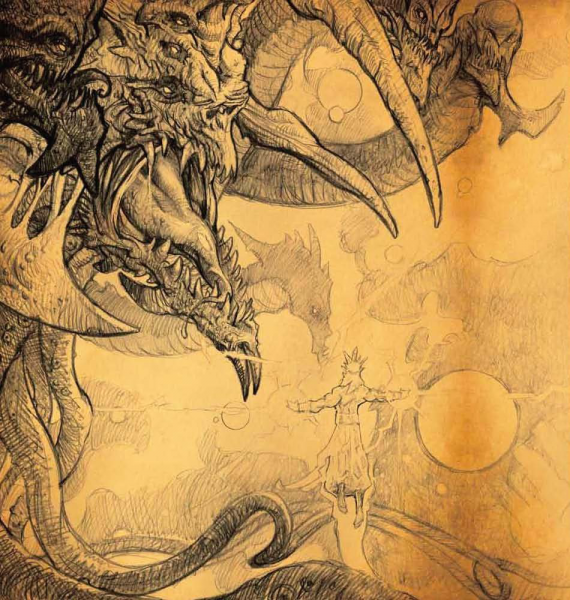 Anu was the first entity of the Diablo universe, arguably the creator god from which everything stems. Before anything of the universe existed there was just a pearl, and this pearl was the unfathomable spirit Anu, who was the sum of all things: good and evil, light and dark, physical and magical. When anu contemplated itself, it decided to cast off all of its imperfections to become pure. What remained was a diamond warrior, but the cast off parts assembled themselves into Tathamet, a seven-headed dragon of death and darkness. The two beings battled with each other within the pearl for countless millennia. As the two beings landed their final blows, their deaths created the universe and everything in it. Anu's shining spine became the Crystal Arch, where the High Heavens eventually formed and from where all angels come. Tathamet's body would similarly become theBurning Hells, and the seven heads of the dragon became the Great Evils. The three central heads the Prime Evils, while the remaining four became the Lesser Evils. In the middle was where Pandemonium would form. This was the location of the Worldstone, also known as the Eye of Anu, which both Heaven and Hell would battle for.

The creation myth was first explained in the Book of Cain, and it is clearly stated there that it is unknown whether the story of Anu is true or merely an allegory for how the universe was created.