The Sorcerer is a class from Diablo I. He is a powerful spellcaster and member of one of the eastern mage clans, the Vizjerei. The Sorcerer starts out as a very weak character, but quickly grows in power once he had gained access to a few skills. Once he has assembled a few key spells (Fire Ball, Mana Shield, Lightning and Stone Curse) he becomes virtually unstoppable and can plow through enemies that the Rogue and Warrior, the other two classes of the game, would otherwise find troublesome.

The Sorcerer is not the canonical hero of Diablo I, though he did traverse the catacombs beneath Tristram. He would eventually become The Summoner and was subsequently slain by the band of heroes that defeated the three Prime Evils during the events of Diablo II. 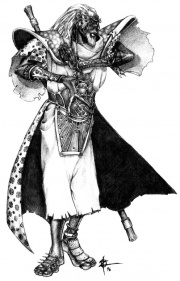 Concept art for the Sorcerer

Sorcerers in Diablo I were the most effective spell casters. Since they had the highest maximum magic out of all character classes, they could effectively use the high-end spells. These high-end spells required more than just a level one proficiency. One such spell was Golem, and although it was never very powerful even at high levels it was even worse at low levels.

Another primary sorcerer spell, this one extremely powerful and unbalanced (directly causing the mechanics change to Energy Shield in Diablo II) was Mana Shield. This shield of magic made enemy attackers deal damage to the caster's mana rather than the caster's life. Other classes could not assemble the magic needed to use it, and had to divide their attention between strength, dexterity and vitality. The Sorcerer however could spend all his points in magic, which would not only serve as his life meter, but also power up the damage of his spells. Coupled with the destructive power of some spells in the game, like Chain Lightning and Fire Ball, the Sorcerer was very powerful if you knew how to play him.

The Sorcerer can recharge staves for free, but this act lowers the maximum charges with every use, making the skill virtually useless as players would prefer to go to Adria to recharge their staves instead

"Although practitioners of the mystic arts are scarce within the often superstitious and religious lands of the West, many magi have made the pilgrimage from the Far East to see for themselves what horrors lie beneath the ruined Cathedral of Khanduras. The veiled Brotherhood of the Vizjerei, one of the eldest and most dominant mage-clans of the East, has sent many of its acolytes to observe the dark events unfolding in Khanduras first hand.

The Vizjerei, known for their brightly colored Turinash, or spirit-robes, have taken a keen interest in both gathering knowledge of demons and seeing them slain. The Vizjerei elders hope that their acolytes will learn the secrets of the dark evil that they sense growing in the West and can destroy it. The possibility of discovering long-lost tomes of magical knowledge within the confines of the labyrinth has also captured the interest of many wandering Sorcerers.

Most magic in Khanduras is in the form of enchanted items and elixirs. The Eastern Sorcerers have developed a greater understanding of spellcasting than the other classes, and while a Vizjerei neonate knows only the simplest of spells to start, he can expect to rapidly grow in power as he discovers new incantations. All Sorcerers possess the ability to recharge spell staves by drawing power from their surroundings and channeling them through the staff."<ref>Blizzard Entertainment, Diablo I Manual , page 34 .</ref>

There are two distinct playstyles for the sorcerer. One is the Artillery mage which sacrifice armor class on equip for extra spell level bonuses. He will typically use items that boost skills and Magic, like Naj's Light Plate, Thinking Cap and Dreamflange. The other is Tank Mage which is more defensive, using high armor class armor and helms along with a Dreamflange and shield. For either of these the Dreamflange can be substituted for a Civerb's Cudgel for taking down triple immunes.

Because of the powerful nature of the sorcerer, many players began playing variants. Arguably, one of the most famous is the Beyond Naked Mage. The rules are fairly simple, the BNM must only use equipment which will negatively affect his stats.