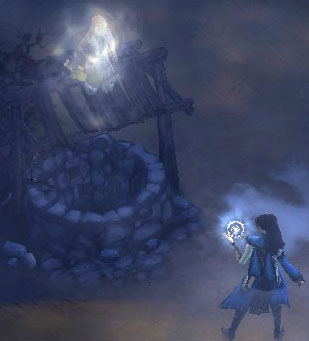 Little Girl Lost is the first quest seen in the BlizzCon 2008 demo. A basic "FedEx" style mission. Background There's no telling if this quest will appear in this location, or anywhere else in the final game. It was a simple, easily-completed quest, but it's not wise to draw too many conclusions about how quests will be presented in the final game from this one, which might have been put in and kept very simple just for the Blizzcon demo. There was a similar quest in Diablo 1 Hellfire, where players have to go and find little Celia's teddy bear. This might place the Little_Girl_Lost quest with other quests put into the game for nostalgia just like the Injured Villager's dialogue, and Cain's reappearance. Quest Walkthrough There were three components to the quest. The little girl's ghost in the well. The girl's mother, AKA the crying ghost. The doll, found in a special chest in the centre of Tristram. The quest's story is simple enough. The little girl's ghost was lost in the well, unable or unwilling to ascend (to heaven?) since she couldn't find her doll. The player had to find the special chest, click it, pick up the doll that fell out, take it to the well, and drop it. The girl would then exclaim how happy she was to have her doll back, and would float up into the sky. The screenshot here shows the moment her ghost flies out of the well to freedom, or heaven, or reincarnation, or something. The metaphysics aren't made clear. The girl's mother does not need to be spoken to at all, but if the player found her before delivering the doll to the well, the mother (a human-sized ghost who wandered back and forth in the ruins of Tristram, sobbing desconsolately) could be overheard, muttering through her tears, words to the effect of, "She's lost. She'll never find her way out without the doll. Oh the poor girl. Lost forever." The well was clickable before the doll was found, and produced a verbal prompt similar to the ones in Diablo II: "I can't do that yet." or words to that effect. Nothing in the female ghost's dialogue specifically told the player to go find the doll in the chest and take it to the well, but since all 3 elements were conspicuous in the small area occupied by ruined Tristram, it didn't exactly require Sherlock Holmes to unravel the mystery. Reward This quest rewarded the player with magical boots. The properties on the boots were random, but within the range of mods that you'd expect to find at that level. The boots were automatically equipped, and when the reward was given, after the girl's ghost flew away, a pop up window announced the quest completion and displayed the reward, with the stats listed on the screen. This was a handy technique, since it saved the player the trouble of opening up their inventory to look over the item.