The Warrior is the playable character class in the original Diablo I. Though he appears to be native to Khanduras itself, it is never specified whether he was a military man, mercenary or something else entirely In Diablo I. In Diablo III however, he is stated to be the other son of King Leoric, Aidan. Opposed to the Sorcerer, the Warrior is probably the strongest character during the first few levels of play. Later on however he definitely becomes the most challenging to play, suffering greatly compared to the damage output of both the other classes.

The Warrior is the canonical hero of Diablo I. Constantly beset by Diablo's will during his journey down into the labyrinth, he finally defeats the demon. However, after having defeated Diablo, he thrusts the demon's Soulstone into his forehead, thereby becoming the Dark Wanderer and Diablo's new host. Though he appears to continue to fight the Lord of Terror's influence even after his possession, there is little he can do. His body eventually dies underneath Travincal, though it is unclear what has happened to his mind before then. 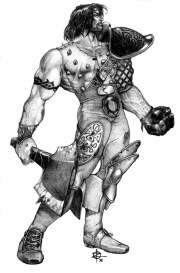 Concept art for the Warrior

Warriors are the physically strongest character class in Diablo. They can wield swords, axes or maces with ease. In later levels of the game, the Warrior often has similar life to that of the earlier levels, but the monsters at this point do much more damage. This often necessitates the use of a shield and more defensive and careful play. Their amazing strength allowed them to wear even the heaviest of armor to aid in this.

The Warrior's magical abilities are limited. With the lowest maximum magic of 50 and less mana per level, they are often forced to only use support spells like Stone Curse and Healing. Since their low level attack spells cannot effectively damage high level monsters, attack spells like Firebolt and Charged Bolt are usually not an option. Advocates, Succubi, and other monsters that tend to run away from the player are especially difficult. To follow them might result in aggravating more enemies just off screen.

The Warrior possesses a unique skill which restores an item's durability, but decreases maximum durability. It is often used in emergencies or when the warrior is low on cash, but should never be used as a substitute for Griswold on more expensive items.

"The Warriors of the lands of Khanduras are well trained in all of the weapons of war. Ranging from crusading paladins to unscrupulous mercenaries, Warriors can be found wherever there is conflict amongst their countrymen. Many of these adventuresome men joined with King Leoric's army and went to battle against the Northern kingdom of Westmarch. As the fires of war burned themselves out, these Warriors returned home to find their kingdom in shattered disarray.

Dark rumors of the mysterious demise of King Leoric abound and the evil that lurks within his Cathedral has drawn many Warriors to Khanduras seeking fortune and glory. Though they were warned by the people of Tristram, a few of these brave souls have ventured into the chaotic labyrinth beneath the old church- never to be heard from againÉ Whether they are driven by valor, honor, madness or greed, new Warriors arrive in Tristram every day, ready to challenge the dark unknown that awaits them beneath the earth.

The Warrior is the strongest and toughest of the three available Classes, and he excels in the art of close combat. His primary weakness is that his extensive physical training has left little time to develop more than a rudimentary knowledge of magic. The extended periods of time that most Warriors spend away from their homes and civilization requires that they learn to repair their own weapons and armor, although their skill is no match for the talent of a true blacksmith."